Prescot Town Council is able to provide Small Grant Funding of up to £500 for local community projects.

What is Section 137 funding?

Section 137 refers to the Local Government Act 1972, which ‘empowers Local Councils to have the power to spend up to a prescribed amount in any one year for the benefit of the inhabitants of the area or part of them.’

Section 137 is open to any community, voluntary, charitable or non-profit making organisation based in Prescot or predominantly serving the Prescot community.  Organisations must be:

For further details please read the guidance notes attached below and if you wish to make an application please complete the application form which is available by clicking the link below:

Prescot has a rich tradition as a Town with a strong community, sometimes the efforts of particular individuals and groups stand out as being above and beyond that of a usual citizen. These groups and individuals are not always aware of the positive impact they can have, on both individuals and the wider community, and can go largely unsung for their actions.

In order to recognise these individuals and the positive contribution they make to the lives of others, the Town Council operate the Prescot Community Recognition Awards every year.

Nominations for 2022 are now open and will close on 31st May 2022. Please complete the nomination form which can be downloaded below and e-mailed to enquiries@prescot-tc.gov.uk or handed in to Prescot Town Hall. 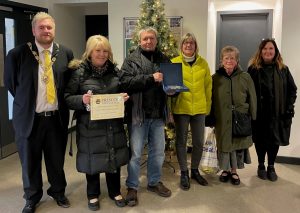 The group was set up in January 2018 as a direct response to members of the Prescot Community being alone in the community on Christmas Day. The group spent a year fund raising and then provided transport for 30 people to attend Prescot Town Hall on Christmas Day to enjoy Christmas Dinner prepared by a chef, entertainment by a local singer and the company of the volunteers for the day. They were each given a food hamper to take home. A further 30 people who were unable to leave their homes were provided with a delivery of Christmas Dinner and a hamper.

The following year the group’s plans were adapted to accommodate COVID and the impact on the community, many of whom were furloughed, on zero hours or becoming unemployed as a consequence of the pandemic. There was never a greater need than to support the community in these unprecedented times and the group fulfilled this objective.

The group provided 170 families with a butcher (or alternative for non-meat eaters) voucher 2 weeks before Christmas (£25) and a Hessian Christmas Sack containing Seasonal Fruit and Vegetables, Christmas Pudding, box of Christmas Crackers & carton of sweets (£25) 2 days before Christmas and all delivered discreetly to their homes.

Families were identified by all of the local primary schools, Children’s Centre and Professionals with Prescot Town Council Councillors also able to refer residents who were in need. The group fund raised close to £8000 to cover the cost of this initiative of feeding 170 families on Christmas Day.

Many families have given feedback stating what a massive lifeline this was for them and in view of this the group have been finding innovative ways to fund raise once again this time with a goal of meeting the need of 200 families in the community this Christmas 2021.

Given many organisations such as local foodbanks were unable to function during COVID it is a phenomenal achievement that this group carried on regardless, both in generating funds and being able to work with other partners in identifying the people who really needed this offer, navigating COVID guidance and getting the offer to the recipients in a safe manner whilst protecting their identities. In effect this group has made Christmas happen for many of Prescot’s residents and all the groups volunteers should be recognised for their work.

You can find more information about the group here and make a donation. 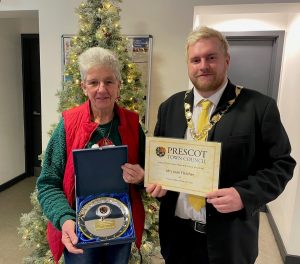 Jean Fletcher is a founding member of the Friends of Eaton Street Park and has been integral in the group’s development over the past eleven years. The volunteer hours given at almost every event ever delivered by Jean are incalculable, but they have been given selflessly. Running along parallel with this is her volunteering for Willowbrook Hospice, originally at their St Helens shop and transferring to Prescot when the shop opened here several years ago. Jean has been a shining light amongst the groups and is absolutely dependable with a ‘roll your sleeves up and get on with it attitude.’ Unfortunately, Jean lost her husband earlier this year and despite the massive impact of this she has continued to fulfil the volunteer duties previously mentioned.

Jean has contributed to the betterment of the Friends of Eaton Street Park and ultimately one of the two parks in Prescot, promoting its use and nurturing the green space. Jean certainly has made an outstanding contribution to the Prescot Community.

You can find more information about the Friends of Eaton Street Park here. 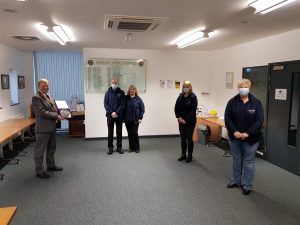 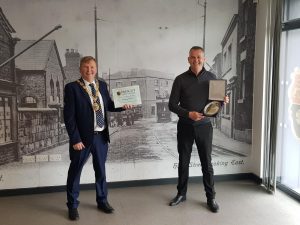 Al’s Arc – Prescot Community Group Runner up of the Year

James Inglesby – Prescot Citizen Runner up of the Year

Karl and Clare Duvall – Citizens of the Year

Founders of the Red Box Appeal in Prescot and then Knowsley. It was through Karl’s role as school governor at the Prescot School that he became aware a startling problem affecting students.  Although the problem must have existed for some time it had never been addressed. Karl learnt that a number of female students were losing valuable schooling as a result of not having appropriate sanitary products to address their menstrual cycle, which led to them not attending school during this time. Appalled by this knowledge Karl and Clare decided to take action by developing the Red Box project. Initially for The Prescot School, the Red Box Project is a simple concept whereby a Red Box is provided to a prominent building enabling people to donate sanitary products, the contents of the box are then collected and distributed to those who need them. The project was such a success Karl and Clare soon moved beyond the town boundary and have pushed the project out to almost every school in Knowsley. We live in a Town and wider area where there exists high levels of deprivation, that deprivation is not solely experienced by students at our local schools but also their parents and it has also been the case that some male students have accessed the Red Box to provide its contents to their families at home.

The project that Karl and Clare have conceived, developed and delivered has addressed a serious issue affecting education and wider issues within our Town and indeed the borough. It is literally impossible to estimate the number of lives they have had a positive impact on and the number of school hours that would had been lost had they not developed the Red Box project, it is people like this that change perceptions, reveal problems and do something about them, we should be honored to call them Prescotians. 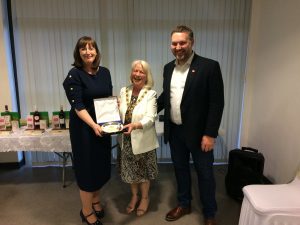 The Friends of Eaton Street Park – Community Group of the Year.

The group was initially formed in 2010 after local residents got together to support the Revitalisation of the Park. Initially comprising of just eight members, the group has grown and expanded both in number and achievement over the years having developed it’s own events programme and increasing memberships.

One of the group’s first achievements was the installation of new gates to the park and the restoration of the rose garden, which had sadly fallen into decline. Working alongside officers from both Knowsley and Prescot Town Councils the group managed to draw in £10,000 of external funding and developed links with Evelyn Primary School whose pupils helped to design the new gates. The existence of the group themselves and their role in delivering the park improvements were a key component that allowed an application for a Green Flag Award to be submitted. The park did indeed gain Green Flag status in 2012 and has maintained the award ever since.

A constant barrier to the group’s progression was the lack of a suitable building from which it could provide onsite activities. Once again, the group’s activities in gathering evidence to support another funding application were invaluable and this led to removal of the dilapidated former scout hut and its replacement with a modern fit for purpose pavilion building at a cost of £80,000. The friends were then able to use the pavilion as a base to provide a weekly coffee afternoon on the park for the last four years, come rain or shine. Not satisfied with a weekly event the Friends have now developed an annual program of events held on the park, some free to the public whilst others generate an income that is then reinvested into the parks infrastructure or future free events. The last example of this was the replacement of the old wooden benches around the bowling green with solid granite blocks, a replacement of this type means new seating will literally last forever, a project which cost £2,100.

Most recently the group have been involved with a project to provide activities on the park during the school holidays with over 200 residents in attendance. 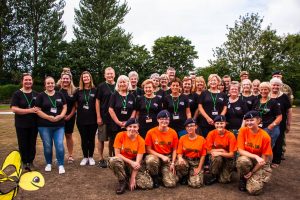