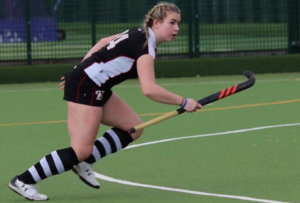 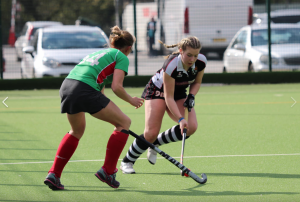 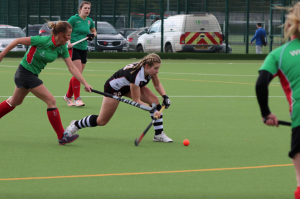 Kirsten first started playing hockey at junior school, although she had no real experience of competitive matches until she joined Prescot Hockey Club in 2014. As an inexperienced 13-year-old, Kirsten hopped between the third and second teams for a season before being invited to County trials and standing out enough to be selected for Lancashire. This proved to be a real boost for Kirsten’s confidence, and she soon developed into a solid second team player with the occasional first team appearance to increase her exposure to the demands of ladies’ hockey.

It was during the 2015/16 season that Kirsten was made captain of the Lancashire u16 side. From this platform, she was nominated to join the Manchester Junior Regional Performance Centre and subsequently selected to represent the North of England. Kirsten finally made her real breakthrough into the ladies’ first team at Prescot Hockey Club in the 2016/17 season while continuing to captain the Lancashire County side.

As a student at Carmel College, she qualified to compete at the Association of Colleges National Championships and only narrowly missed out on a medal as a representative of the North West. It was also during this same 2018/19 season that Prescot qualified for the England Hockey National Cup semi-finals for the first time in the club’s history. Despite not making it to the final on this occasion, the team went on to win the league, the regional Division 1 Cup and All Divisions Cup and Cup Winners’ Cup to secure promotion into the North league.

In the Summer of 2019, Kirsten was selected to play for the senior Lancashire County team at the Northern County Championships. As one of the youngest players in the competition, she was put forward to take part in the Wales National Player Pathway at the beginning of this season. Kirsten is now part of the North Aspire programme and working hard to be nominated for the National Age Group Squad (NAGS) in the coming months as a prospective member of the Welsh National team.

Most recently, Kirsten was invited to Reading to take part in the final round of trials for the College England team. After an intense day of training with top-class students from around the country, Kirsten was selected for the England National Colleges side and is now looking forward to playing alongside another new set of quality players over the coming season. Only 22 players from across all the UK colleges have been selected for the 2019/20 ladies squad.

Kirsten said ”I really can’t thank the coaches and setup at Prescot Hockey Club enough for the role they have played in my journey so far. Securing a second consecutive promotion with my home club would be the icing on the cake of what has been a whirlwind season already, so watch this space!”

Prescot Hockey Club are delighted for Kirsten and that all her hard work at training and playing competitive hockey has paid off. It’s an outstanding achievement to be selected for the England College team.